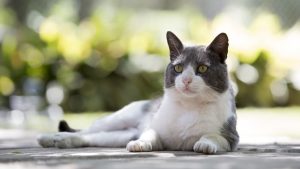 Starting with nipples on male cats.

Unfortunately, I couldn’t think of a more tactful way to start this article but writing about nipples on male cats is certainly worthwhile as I’ve spoken with dozens (and dozens) of cat owners who are honestly confused about the subject.

So why do male cats have nipples? Just like many other mammals, nipples on male cats are a result of an evolutionary quirk. Nipples are developed before the actual gender of the fetus is determined even if male cats don’t actually need them.

You can learn more about the details of feline fetal development in this article from PawPeds but just like in humans nipples on male cats vestigial structures that don’t actually serve any purpose.

But that’s usually only the first question that gets asked about nipples on male cats.

Let’s dig a little deeper and cover everything you ever wanted to know about male cat nipples…but were afraid to ask!

Wait A Second…Cats Have Nipples?

But if you’ve never noticed nipples on any cat don’t be surprised. You’re not the only one.

Obviously, cats have plenty of fur that can obscure and hide their nipples but another factor is whether or not your female cat has been spayed. When female cats are spayed at a young age and never have a litter their nipples don’t develop in the same way. As a result, they can be very difficult to actually see.

In other words, your male cat’s nipples are all for show!

How Many Nipples Do Cats Have?

Here’s one of the most interesting feline nipple factoids…cats actually have a varying amount of nipples! It’s usually between 6 to 8 nipples in pairs along the abdomen but it’s completely normal for this number to vary between cats. That’s true for both male and female cats!

There is even the rare case of a cat breaking the rules and having an odd number of nipples!

If you want to take a moment to stop reading this article and count your cat’s nipples, I totally understand. After all, your cat might be one of the rare felines to have an odd number!

How Many Nipples Do Male Cats Have?

Can Male Cats Get Breast Cancer?

Yes, it is possible but luckily it’s quite rare. Feline specialist Dr. Arnold Plotnick explains that “Males rarely develop breast cancer. In fact, less than 1% of cats that develop mammary cancer are males.”

It’s also worth noting that you can greatly reduce the risk of breast cancer in female cats by spaying them, too. Dr. Plotnick explains “Intact cats are at an increased risk of breast cancer. Spaying a cat, especially before their first heat, greatly reduces this risk. A hormonal influence is known to exist in dogs, and it is clear that estrogen and progesterone play a similar role in tumor development in cats, although this role is not as well understood.”

It’s just another reason to always spay your cat!

Where Are Your Cat’s Nipples?

I’m sure you already know that your cat’s nipples are on their tummy.

But finding out where they are exactly can be a little tricky. You can find your cat’s nipples to the left or right of the middle of your cat (also called your cat’s midline). This picture of a mom cat nursing her kittens will give you a good idea of where to look.

You might have to move some fur around to find them. It can actually be easier to feel for them first then part the hair to find them. Cats that are pregnant or nursing will have much more prominent nipples which makes them easier to find.

Cat’s that are spayed or haven’t been pregnant will have smaller nipples that feel like a bug bite with a distinct point (that’s the nipple). They’re generally pretty soft at the edge and a little firm in the middle.

Most people would describe them as a small, pink, and slightly raised bump. It almost has the same volcano-style shape that a pimple does. One male cat or females without litters they’re quite small.

It’s also worth noting that if you notice something that feels like a nipple where it shouldn’t be make sure to consult your veterinarian.

How Exactly Do Nipples Work?

Nipples allow milk to be transported from a complex system within your cat’s mammary tissue directly into the mouth of her kittens. After millions and millions of years of evolution kittens instinctively know to find a nipple and suck on it to get food. In other words, it’s not something they have to learn.

But they aren’t exactly the most precise little creatures either! Kittens are very quick to suckle anything that could even remotely resemble a nipple including your finger or a littermate’s foot! Sadly, kittens nursing on their littermates is a big problem especially when kittens are taken away from their mother too early. That just shows you how strong of an instinct it is for kittens to suckle!

Cat You Tell The Difference Between Genders Based On Nipples?

In most cases,  you can’t determine the gender of a cat strictly based on their nipples. However, if a female cat has a litter of kittens she’ll most likely have larger nipples for the rest of her life after the pregnancy and nursing process. Not only does your cat’s breast tissue become engorged with milk but having a pack of hungry kitten nursing multiple times a day permanently changes the size of your cat’s nipples.

Still, this isn’t a reliable method since a female cat that’s been spayed early will have very similar nipples to a male cat. If you need to determine the gender of a cat you should rely on checking thier genitalia from the back. This post from Washington State University has a great description of what to look for.

That’s It On Nipples In Male Cats!

Okay, I think we’ve covered just about everything there is to know about nipples in male cats.

Did you know there was so much to talk about when it comes to nipples in male cats?!