Skip to Content
Written by Sarah Crothers in Health & Happiness last updated February 2022
BetterWithCats.net may earn a small commission when you use one of the links on this page to purchase. 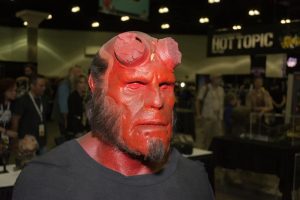 Hellboy, a popular comic book and movie character, is known for his affinity for the feline species. Cats play an important role in Hellboy’s personality and quirkiness, but many fans are wondering how Hellboy’s relationship with cats came to be.

The exact reason why Hellboy likes cats so much has never been confirmed by his creator, Mike Mignola, but evidence exists within the comic books that cats were some of the first ones to show Hellboy any kind of affection and attention, thus cementing his love of the species.

Additionally, cats could simply be part of the overall Hellboy aesthetic thanks to their history within the occult or it could simply be a random addition that readers have analyzed to the extreme.

But the absolute truth behind Hellboy’s fondness of cats may be something that Mike Mignola, creator of Hellboy, and Guillermo del Toro, director of the two more popular Hellboy movie adaptions, take to their graves.

Below we’ll take a closer look at Hellboy’s relationship with cats and try to determine what may have led to his interest in cats, as well as possible reasons as to what role cats may play in his life.

What's Inside show
Who Is Hellboy?
Hellboy’s Relationship with Cats
Other Possible Reasons Hellboy Likes Cats
Cats Have Always Been Part Of The Occult
Hellboy’s Creator Could Be Commenting On Cats And Culture
It Could Be Random
Conclusion

Hellboy, whose true name is Anung Un Rama and who is considered a Cambion (half-human, half-demon hybrid), was summoned by the character (and eventual primary antagonist to Hellboy) Grigori Rasputin to help turn the tide during the Third Reich and assist in the Nazis’ rise to power. Prior to Rasputin being able to locate the newly summoned baby Hellboy, a team of American soldiers located him first, and thus began Hellboy’s journey to becoming one of the most popular comic book characters to date.

A member of the secret Bureau for Paranormal Research and Defense (B.P.R.D.), Professor Trevor Bruttenholm, was also present in this group and quickly befriended the creature that Rasputin had summoned. With skin fiery red in color, golden eyes, cloven hooves, a spiky tail, and horns protruding from his head, it was at this moment that Hellboy gained his moniker. He would go on to be raised in secret by the U.S. government and would later proceed through training to become a paranormal investigator for the B.P.R.D.

As he aged, Hellboy’s appearance changed much quicker than his mind, and his gruff and fiery personality aligned nicely with his namesake and devilish looks. His education with the B.P.R.D. included subjects such as possession, exorcisms, and studying sacred artifacts. Throughout the series, Hellboy encountered various supernatural creatures and beings such as vampires, werewolves, and even the Baba Yaga from Russian folklore.

Throughout Hellboy’s travels, his good deeds were mired in skepticism, and he often butted heads with those who still viewed him as an evil creature. From the time he was a baby, people frequently showed their disgust towards his appearance, and this impacted Hellboy’s view of himself.

Despite obtaining honorary “human” status from the United Nations and the title of “world’s greatest paranormal investigator” at the time he became an official agent for the B.P.R.D. in 1952, it wasn’t until he defeated the Saint Leonard worm and flowers grew from his spilled blood that he was truly seen as a virtuous and good natured being.

Due to the general stigma against Hellboy because of his looks, origins, and supernatural abilities, many people scorned him, either out of fear or revulsion.

It was difficult, if not impossible, for him to make friends and being rebuffed by the human race may have been one of the reasons that led Hellboy to file down his horns. It is at this point that his relationship with the feline species may have begun, as they were some of the first creatures to show any signs of affection and interest towards Hellboy.

While nobody but creator Mike Mignola (and perhaps director Guillermo del Toro) may know for certain just why Hellboy has such an affinity for the feline species, there are hints throughout both the comic book series and the movies as to why Hellboy finds comfort in cats.

There is a divide among fans as to whether his intense love of cats is strictly related to the movies rather than the comics, where he is shown to be more of a dog lover.  Based on his initial encounter with cats in the comic books, it appears he is just a gentle soul, and this is showcased by his love of animals.

He is not swayed one way or the other in terms of loving cats more than dogs (and vice versa). His affinity towards cats is much more subdued in the comic book series than in the del Toro films, though. In the films, Hellboy’s love of cats is not only shown in more detail but is a defining part of his personality.

A lot of information from the comic books about Hellboy’s relationships with cats may have to be inferred based on the basic psychological and physiological needs of a person, as there is little evidence one way or the other as to the actual reasoning behind how his relationship with cats was formed.

As a boy, it was difficult for Hellboy to make friends due to his appearance and people often ran away from him or reacted towards him in a negative way. At one point in his early life, he encounters a cat. Expecting the cat to run away from him just as the people did, Hellboy is delighted when the cat instead opts not to leave and seemingly appears to enjoy the company of Hellboy.

Being one of the first living creatures that did not run away from him (excluding his adoptive father and a few members of the B.P.R.D.), Hellboy’s fascination with the feline species could have begun here, with the character finding comfort in this four-legged species that was just as independent and quirky as he was.

In the Hellboy films, Hellboy lives with a multitude of cats and is shown to be outwardly fond of his furry friends. There is an abundance of cute moments within the films where he showcases his caring attitude towards his cats, and he is often the butt of the jokes that his teammates throw his way whenever Hellboy shows his softer side towards his feline companions.

While Hellboy did canonically interact with a cat and showed affection towards it, there could be other reasons as to why cats play such an important role in his life. While we may never know the full truth behind Mignola’s reasoning for Hellboy’s interest in cats, we can speculate as to the symbolism that cats may hold in the Hellboy universe on a broader scale.

Cats Have Always Been Part Of The Occult

Cats have been portrayed alongside the spiritual and the supernatural throughout history. From ancient deities to powerful supernatural monsters, our feline friends have been associated with mystique and the unknown for almost 10,000 years.

In many ancient religions and cultures, cats were viewed as helpful and were considered totems of good luck. They were treated with the utmost respect, and many were depicted as totems of various gods and goddesses. Their usefulness as hunters to keep mice populations down was also praised, and they could be found in many parts of the world where their cultural impact continued to grow and evolve.

In Hellboy, the titular character is depicted as a half-demon, half-human hybrid and is associated with the Underworld. Throughout the Renaissance period, cats (particularly black cats) were often depicted as “evil” beings associated with witchcraft, the devil, and everything that stood against what those from the Church viewed as “good”. In looks, Hellboy bears resemblance to some depictions of a devil, thus it would make sense that cats are attracted to him in the series.

However, the fact that Hellboy is shown as a gentle-natured and kind being indicates that perhaps the religious depiction of cats as being evil is, in fact, opposite to how they actually are. Hellboy’s interactions with cats emphasize that cats are friendly creatures who do not care about how you look or where you come from.

Hellboy’s Creator Could Be Commenting On Cats And Culture

Mignola could also be noting how it is frequently humans who discriminate, mock, and judge others based on their looks and abilities, whereas animals are much more inclined to be non-judgmental when it comes to how a person looks or what culture they identify with, and they are capable of morality, though perhaps not on the same level as human understanding.

Seeing the cats interact with Hellboy, who had previously been spurred by other people due to his scary persona, shows that cats do not “judge a book by its cover” when they pick a human (or in this case a non-human) and instead gave Hellboy a chance and he, in turn, showcased his affection for the cats. It also seems that, generally, cats like him too and know he’s a friend.

All that being said, Mignola himself has stated in interviews that what he draws and depicts in his stories have no real meaning or ulterior motive behind them. While his interest in religion and inspiration from the works of author and poet John Milton may have influenced certain designs and mythologies within the Hellboy universe, there is no evidence that any of that influenced his decision to add “cat lover” to Hellboy’s personality traits and any reasoning as to why Hellboy loves cats is mostly just speculation among fans.

It Could Be Random

For all we know, it may have just been a minor point that originally held no meaning within the storyline, but the fans took the idea and ran with it, thus the del Toro movies emphasizing Hellboy’s love of cats may be more catering to fan interest than actual storyline relevance and character development. Or, it could be that Mignola, who has a cat himself, just wanted to add a bit of his own furry friend into the Hellboy universe!

The truth behind the exact reason as to why Hellboy identifies with cats so much may always be a mystery, but there is evidence that his fondness for the feline species stems from his interactions with them as a child. The cats showed him affection when others wouldn’t, thus his connection to cats may be based on an innate need for familial love and attention.

Delving deeper into the speculation and conjecture about Hellboy’s fascination with cats and the symbolism of cats throughout human history also brings up the possibility that his relationship with cats is more cultural- and spiritual-based, and it is merely Mignola’s way of bringing feline symbolism in line with the occult-like atmosphere of the Hellboy series.