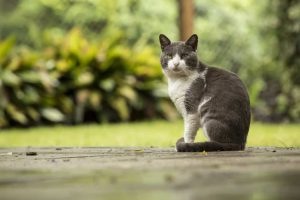 Dealing with cat litter is one of the biggest pains of being a cat owner.

It’s heavy, stinky, and easy to get everywhere. All reasons why it can be very tempting to simply dump the stuff outside and call it a day.

But is this a good practice and is it illegal to dump cat litter?

It’s not a good idea to dump cat litter outside or anywhere else besides the compost bin or the trash can. Not only is dumping cat litter potentially illegal depending on where you live but it’s also bad for the environment and can endanger other animals and even other people in some cases.

Despite how appealing it may sound to open the door the dump the box it just doesn’t make sense to do. Let’s break down why and how you can make litter disposal a little easier.

What's Inside show
Toxoplasmosis Is Always A Risk When Dumping Litter Outside
Dumping Cat Litter On Private Or Public Land Is Against The Law
Dumping Cat Litter On Your Own Property Could Also Be Illegal
Can I Just Dump Cat Litter In The Woods?
Most Cat Litter Isn’t Going Anywhere
How To Properly Dispose Of Cat Litter
The Trashcan Is The Best Option
Composting Can Work…If You Know What You’re Doing
Flushing Is A No Go
Closing Thoughts

Toxoplasmosis Is Always A Risk When Dumping Litter Outside

Besides the legal aspects of dumping cat litter, there’s a major environmental risk in the form of toxoplasmosis which can be shed in a cat’s stool and by extension the litter too. Toxoplasmosis is a single-celled parasite that can infect humans, cats, and almost every other warm-blooded critter on the planet.

Cats contract toxoplasmosis by ingesting rats, mice, or birds that are carrying the parasite and humans can get it from contact with a cat’s stool. But what really makes this disease so problematic is that it can survive outside for a long time. Depending on the climate, toxoplasmosis could be active in the environment for as long as 12 to 18 months and it’s one of many reasons why you shouldn’t use dirt or sand from outside for your cat’s litter.

If you dump cat litter, and the cat poop that goes with it, you also can’t expect the toxoplasmosis to stay put and once it’s out in the open it can easily make its way into the water supply.

This isn’t just a theory either and toxoplasmosis is already making an impact on the California otter population where, according to The New York Times, “Toxoplasma infections contribute to the deaths of 8 percent of otters that are found dead, and is the primary cause of death in 3 percent.”

While the risk of toxoplasmosis is low for indoor-only cats, it’s still quite possible. Despite their reputation for playing with their prey, cats are skilled hunters and if your indoor feline friend is exposed to an infected mouse or rat for even a moment they won’t hesitate to pounce…literally. And that’s all it could take to be exposed to toxoplasmosis.

Cat’s that are already regularly going outside are even more likely to have been exposed to toxoplasmosis and owners should be even more motivated to avoid dumping their litter.

In most cases, the risk of toxoplasmosis to people is low unless they have compromised immune systems but by dumping cat litter outside you’re potentially exposing wildlife to this disease, and depending on the species they may not be able to fight off the infection.

Illegal dumping is a big problem.

Not only in the United States but across the globe, you can expect local jurisdictions to have strict laws against dumping waste of any kind, including cat litter, in appropriate areas. In the United States, some dumping may even be classified as a felony!

Of course, it’s going to be difficult to reach felony levels of dumping with cat litter alone but if you were to use the same area over enough time it’s easy to see how it could get to that level. Additionally, some areas may have specific laws against dumping animal waste which means dumping cat litter could put you into another legal category altogether.

But even if you aren’t risking a felony by dumping cat litter, the cost of a major fine should be enough of a deterrent to skip this option- not to mention the major environmental impacts.

Dumping Cat Litter On Your Own Property Could Also Be Illegal

I’m sure most folks aren’t surprised that you can’t just go to someone else’s property and start dumping cat litter. But you may be surprised to learn that in many jurisdictions it’s illegal to dump animal waste of any kind, including litter, on your own property.

When you consider that there are thousands of farms with millions of animals that are all producing stool, it suddenly becomes obvious how big a deal the management of animal waste really is and why laws like this are so important for protecting the environment.

These laws can be confusing to navigate and while it could be legal for you to dispose of cat litter on your property, it’s not something I would count on. Instead of trying to navigate the complicated laws, it’s better to just find another option!

Can I Just Dump Cat Litter In The Woods?

Dumping cat litter in the woods or another secluded area is illegal in most areas and the risk of spreading toxoplasmosis still exists in even the most secluded and wooded areas. Toxoplasmosis can survive in the environment for more than a year, and travel as part of the water supply exposing wildlife along the way.

So even though it may be tempting to dump cat litter deep in the woods, the risk to the environment still just isn’t worth it.

While there are more cat litter choices than ever, traditional clay cat litter isn’t biodegradable which means that once it’s been dumped it’s not going anywhere any time soon. Of course, it might not stay where you left it but that doesn’t mean it’s actually gone. In fact, depending on the type, it can take decades for cat litter to actually decompose.

How To Properly Dispose Of Cat Litter

Okay, so dumping cat litter is out.

What should we do instead? Let’s break down some of the best options along with a few others to avoid.

The Trashcan Is The Best Option

I know, it’s disappointing to hear that the best option for getting rid of cat litter is sending it to the landfill but that’s still the best way, at least for most folks, to safely dispose of cat litter. The landfill isn’t the most eco-friendly option but if you’re using clay cat litter then you don’t have a lot of other choices.

Composting Can Work…If You Know What You’re Doing

If you’re experienced, you can compost cat litter and your feline friend’s waste. However, because composting may not always kill toxoplasmosis, this isn’t something that should be tackled by the novice composter.

Not only can toxoplasmosis potentially survive in the compost and eventually make its way into your garden but it can still spread to the water supply if you don’t carefully manage your compost pile.

Flushing Is A No Go

Simply flushing cat litter down the toilet may seem like a good choice- especially if you already keep the litter box in the bathroom. But traditional cat litter is so good at expanding that flushing it down the drain can easily clog pipes.

But even if you’ve picked out the perfect flushable brand of cat litter that won’t clog your drain, you could still be introducing toxoplasmosis into the water supply which only makes this choice a litter better than dumping.

Dumping cat litter outside might seem like the perfect way to get rid of cat litter…at least at first.

After all, cats regularly use the bathroom outside and most aren’t using outdoor litter boxes.

But not only is dumping cat litter outside illegal in most cases, but it’s also just plain bad for the environment. Used cat litter spreads toxoplasmosis and causes harm to wildlife but most litters are also non-biodegradable which means they’ll be building up outside for years to come.

So while it may not feel like the perfect option, bagging up use cat litter for the landfill is the better choice.