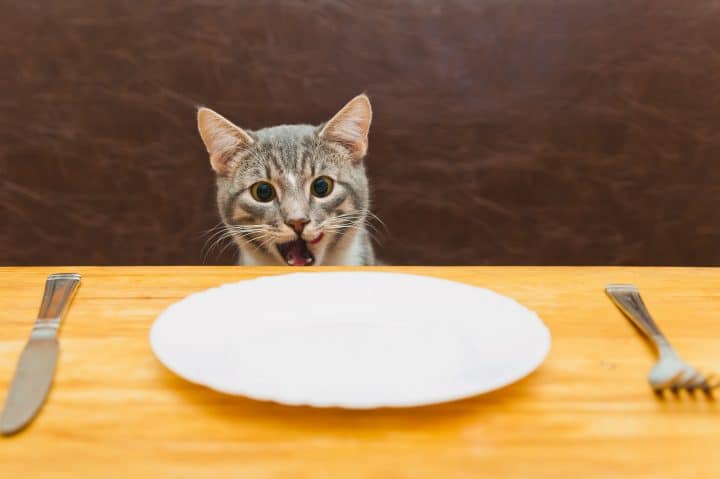 It might be difficult to imagine a time where there was no commercial cat food available. Living in this modern world, it’s easy to forget that things were once different. But if we were to travel back in time, we would clearly see that the reality of our feline companions was significantly different, especially when it came to food!

What did cats eat before cat food? Prior to feline domestication, cats hunted small animals like birds and rodents, and before processed kitty food, they were given food scraps and kept humans free of pests. Only when people stopped regularly storing and growing their own food did commercial cat food became available.

If you want to know what cats ate before cat food was invented, the history of feline nutrition, as well as the rise of commercial cat food, then you’re in the right place!

What Did Cats Eat Before They Were Domesticated?

Our small-sized cats are part of a large line of felines, and unlike canines, they are all obligate carnivores, meaning they can only rely on a meat-based diet to survive.

As the Cornell Feline Health Center states “cats evolved as hunters that consume prey that contains high amounts of protein, moderate amounts of fat, and a minimal amount of carbohydrates, and their diet still requires these general proportions today.”

Before the processed foods and any other help from humans, feral cats would need to hunt to get a balanced meal that also had to include, fats and oils, minerals, and vitamins. Because of their small size, they relied on smaller prey like birds, rodents, and some reptiles. Since cats were also both predators and prey, they had to develop fast hunting skills and smaller prey made it easier for cats to catch, carry and eat it whole without leaving any traces for other cats and predators to track.

What Did Cats Eat Before Cat Food?

While we might be taking for granted the large number of domesticated cats around the world sharing their day-to-day life with their humans, these fluffy creatures were once wild and free. Humans wouldn’t have a reason to domesticate cats since felines could have little to no contribution to human survival if we were to compare them to other animals. So it’s clear that the choice was left in the paws of cats and more than 10.000 years ago they made the decision to become a part of our society.

According to researcher Claudio Ottoni of the University of Leuven, “mice and rats were attracted to crops and other agricultural byproducts being produced by human civilizations. Cats likely followed the rodent populations and, in turn, frequently approached the human settlements.” These feline hunting skills made people see their value and so it comes as no surprise that they rose in ranks to a Godlike status in Egypt.

Throughout their domestication, cats were also taken aboard ships as mousers and as the ships traveled around the world they also began to claim more territories. During that time and before commercial cat food was developed, cats were doing well enough. Some cat owners would feed their cats food scraps and meat leftovers that humans wouldn’t consume, but still, they were largely dependent on their hunting skills, keeping the farms and houses free of pests.

Even modern research that’s been done on free-ranging house cats has shown that well-fed cats hunt no matter where they are. “Rodents were the most common prey in both environments (urban and rural), but shrews and reptiles were killed by cats more often in the rural environment while birds (mainly sparrows and pigeons) were more common in the urban environment.”

When Was Commercial Cat Food Developed?

It’s evident that cats have spent most of their existence, even after they were domesticated, relying on pests like mice and rodents as their main food source, but there came a time when things began to change and pet owners were happy to turn to cat food instead.

While the first commercial pet food was sold in 1860 by an American Entrepreneur James Spratt, the change in how cats were viewed began to shift way before that. In London, from the mid-1800s some cats were seen more like pets than mice exterminators, and so a business called “cat’s meat men” began to rise.

According to the Museum of London, “these feline provisioners bulked out their product with meat too old or diseased to sell to humans.” It’s estimated that 300,000 cats served as mousers in London, mostly employed at the warehouses along the Thames, so it only makes sense that most families would have a cat, which helped the popularity of these pre-commercial food sellers. What’s even more fascinating is the fact that these cat meat sellers in London kept operating into the 20th century.

The Evolution Of Commercial Cat Food

As I mentioned, James Spratt is the founder of canned pet foods, and it was mostly bought by people that had the means to indulge in feeding their pets specialized food, so it wasn’t until the start of the 20th century that the food for dogs and cats gained popularity. Even then, dog food was at the forefront of the pet market, since cats could still hunt and get their nutrition from the outside world, and one can presume that due to their small size they were easy enough to accommodate with leftovers.

During World War 2, pet foods were classified as “non-essential” because metal was needed for weapon production, and since canned food wasn’t available, cats kept relying on their hunting skills and the limited table scraps, while wealthier people invested their money in dry pet foods. When the war ended and the economy began to stabilize, the popularity of pet food grew once again. According to research pet foods”originated from animal feedstuffs based on nutrition that were manufactured for livestock.”

Slowly brands like Purina Mills, Spillers, and Friskies began to develop cat foods. As the years went by veterinarians and nutritionists began to closely study our feline companions to determine the optimal diet for their needs. Health and Safety became an important part of pet foods as agencies like the FDA (Food and Drug Administration), FFDCA (Federal Food, Drug, and Cosmetic Act), and AAFCO (The Association of American Feed Control Officials), also began to regulate pet foods.

It’s important to mention the impact of cat owners as well, as people began to be more aware of what their feline companions needs, even the simple fact that human food could be toxic to cats was a step towards better cat nutrition.

The demand for high-quality cat products also shaped the pet food market and the sometimes cringy but always captivating cat food commercials such as this one!

It’s clear that cat food wasn’t always around, and it also hasn’t continually been the same. Since it was believed that cats can fend for themselves when it came to food, pet food products were first catered to dogs. Now cats can enjoy dry, canned, and semi-moist food. But it wasn’t always like this and it took many years for companies to refine our cat’s food products and create varieties designed for specific needs, like Renal cat food that offers kidney support, or cat food to help with shedding.

The first commercial cat food that ever hit the market came in cans. Purina Mills most likely the oldest but certainly one of the largest pet brands introduced tinned cat foods in the 50s. Around the same time, the method of creating kibbled dry food of any shape was introduced to the market, and to this day it’s the most popular pet food choice. In 1961 Purina is also the first to add taurine, an essential amino acid for cats, to dry cat food, while it was only in 1975 when they released the world’s first 100% completely balanced dry cat food.

Semi-moist cat food followed, but nowadays veterinarians suggest that it “generally contains more sugar and salt than either dry or canned cat food. The extra sugar and salt mean semi-moist food is not appropriate for every cat.” So, perhaps it’s better used as an occasional treat!

What Are The Modern Alternatives To Commercial Cat Food?

It’s amazing how the love of cat parents, the care of the veterinarians and food specialists have helped motivate companies to create better cat food products. But it’s also important to notice that some cat products aren’t always reaching the same standards.

Some people choose quantity over quality, or they simply aren’t sure which brand is better since there’s so much variety. This idea that commercial cat foods aren’t up to standard led to people looking for alternatives.

The need for a natural and homemade lifestyle has led a lot of people to reconsider what they’re eating and subsequentially what their pets are eating. For some feeding their kitties a home-prepared diet made mostly of raw meat like beef, pork, poultry, fish, and eggs, seemed more natural than the packaged, processed cat food available in every store.

But it can be a very complicated process and is certainly a hotly debated topic.

While it can be a good diet if done properly and with great care studies show that there are risks of cross-contamination with choosing a raw meat diet, as they explain that “raw food poses a substantial risk of infectious disease to the pet, the pet’s environment, and the humans in the household.”

Evidence has shown that raw food can contain bacteria and specifically Salmonella. Moreso, there seems to be a nutritional problem with such diets, “such as calcium/phosphorous imbalances and specific vitamin deficiencies,” as explained by another research published in 2019.

Among the raw meat diets, there are commercial raw frozen and commercial raw freeze-dried diets some brands could also be dangerous when it comes to pathogens. Since freezing or dehydrating the meat might still not kill all the bacteria. The FDA, as well as the American Veterinary Medical Association, have all released statements discouraging owners from feeding their cats raw or undercooked animal-source protein, because of the risks they can pose.

With research and specialized guidance is possible to implement a raw meat diet as long as it’s done right. There are also some options that try to walk the line between a purely raw diet and commercial foods. For example, has coated their dry kibble with freeze-dried raw food. It’s still very different from a fully raw diet, but it at least acknowledges your cat’s wild instincts!

In this day and age, it’s clear that we have an abundance of resources and a great variety when it comes to cat food, but to have the wisdom and knowledge to make the right decision for our kitties health, I think we always need to get the advice of a veterinarian. Food is essential, for a healthy weight, strong bones, and a lush coat or even to prevent medical conditions, so if you’re still not sure if your fluffy companion is on the right diet then get some professional advice, and remember there’s always a healthy choice even for the pickiest of eaters!

By looking at the food we’re offering to our furry overlords, it’s clear that our relationship with them has greatly evolved. After centuries of giving them scraps and keeping them as mousers, now these furry creatures dominate our lives, the internet and they have a whole industry dedicated to making their food!

Since we’re on the subject of kitty food, I believe it’s time to give my kitties some treats for being so fluffy and gorgeous without even trying!

Now that you know what cats ate before cat food was a thing, let us know if your kitty enjoys a treat out of a kitty can or they’d rather get a few nibbles out of your leftovers!