Skip to Content
Written by Logan Michael in Big Cats last updated September 2021
BetterWithCats.net may earn a small commission when you use one of the links on this page to purchase. 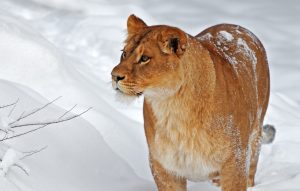 As cat owners, we’re used to our adorable furry friends making the most interesting sounds. Vocalizations like purring, chirping, growling, and yowling are all common and allow cats to express themselves.

The most frequent noise we hear our cats make is the standard meow. It would certainly be unusual to go an entire day without hearing your cat meow several times, as cats tend to meow for a variety of reasons that come up on a daily basis.

Vocalizations aren’t limited to just domestic cats, however. Wild cats, including the big ones like lions, make a lot of noise as well. If you’ve ever been to the zoo or watched a wildlife documentary, you may have heard lions make sounds that are louder and lower-pitched than the ones you hear at home.

Even if the sounds you’ve heard lions make are a bit different, you might be wondering if they can also meow just like domestic cats.

So, can lions meow?

Just like many other cats, lions are capable of making a wide range of sounds for a variety of purposes. However, lions cannot meow like house cats can. Lion cubs might make sounds that sound somewhat similar to their smaller, domestic cousins, but the noise itself is very different.

We’ll talk about the basics of cat meows, but we’ll also explore the differences between the sounds that lions and other big cats produce out in the wild.

What's Inside show
So Why Do Cats Meow, Anyway?
Lions Don’t Have The Same Relationship With Humans
It Mostly Comes Down To Throat Anatomy
Do Lions Roar For The Same Reasons That Smaller Cats Meow?
Do Lions Make Any Other Sounds?
Groaning & Moaning
Growling & Hissing
What Sounds Won’t I Hear From Lions?
Can Any Other Big Cats Meow Like House Cats?
Final Thoughts

So Why Do Cats Meow, Anyway?

However, adult cats don’t meow to communicate with other cats; instead, they use body language and scent. Research has shown that cats can meow to manipulate their owners, and since humans tend to respond to those meows, cats have learned to continue the behavior to get what they want.

While kittens depend on their mothers, adult house cats solely depend on their human owners for food, shelter, and attention. It’s no wonder they meow at us and not other cats: we have what they need!

What might be even more interesting is the similarity between the cries of human babies and the sounds cats make when they want food. One study found that the frequency of purring sounds made by cats seeking food was higher than it was for normal purring and very similar to that of a baby.

Although the experiment focused on purring and did not look at whether or not the cats attempted to mimic a baby’s cry on purpose, it did reveal that humans found the food-seeking sounds more urgent and less pleasant.

Even though it can’t be proven, some people suspect that a cat’s meow works so well because it closely resembles a baby’s cry. Humans respond quickly to the sound of crying babies, and cats want the same sort of response.

Lions Don’t Have The Same Relationship With Humans

Although we’ve already established that lions don’t technically meow, it’s worth mentioning that they don’t have the same need to communicate with humans as house cats do.

Lions are wild animals that naturally interact with other lions, not people. Despite attempts to domesticate lions, most lions won’t ever encounter a human being. The need to make a specific sound to communicate with a person simply doesn’t exist.

Still, just because a feline doesn’t depend on humans for survival does not mean that it’s incapable of producing a meow.

So why can’t lions meow at all?

It Mostly Comes Down To Throat Anatomy

Most cats in the Pantherinae family have vocal folds in the larynx that cause them to produce a roar, rather than a meow.

This is why lions can’t meow. Their throats just aren’t made for it!

On the other hand, members of the Felinae family meow because they have a non-elastic hyoid bone, which causes them to produce higher-pitched sounds. This bone can also create a low-pitched humming sound as the larynx vibrates, which we call purring.

Cats from the Pantherinae family do experience the same vibrations of the larynx when they exhale, but because of their elastic ligaments, the sound comes out as a roar instead of a purr.

Do Lions Roar For The Same Reasons That Smaller Cats Meow?

Because of the difference in larynx anatomy, you might assume that a lion’s roar is just the equivalent of a house cat’s meow. However, you’d be surprised to find out that roars serve another purpose out in the wild.

The roar of a lion can be heard as far as 5 miles away, which makes them excellent at communicating with other members of their pride from a distance. As one of the most social big cats, long-distance communication is quite useful for lions! They will also roar to warn off intruders and to tell their pride that danger is nearby. Male lions even roar to tell other males that they’re in charge; a loud roar is a sign of a powerful lion!

As we’ve already mentioned, the standard meow of a house cat is mainly a tool for communicating a need for food or attention to humans or a mother cat. It doesn’t act as a warning like a lion’s roar does, and it won’t travel long distances.

Do Lions Make Any Other Sounds?

Lions are the only big cats that are social animals—meaning they live in groups, hunt together, and share food. This also means that lions spend a lot of time communicating with other lions. Aside from roaring, there are a few other sounds that lions make to communicate with their pride and any outsiders.

Lions may make low groaning sounds to socialize with other lions. Older lions in particular make moaning and groaning sounds, sometimes in unison. Due to the flexibility of their hyoid bone, these low groans and moans are short sounds equivalent to the purring of smaller cats.

Just like other cats, lions growl and hiss. Growling and hissing can both indicate that a cat is unhappy, scared, or threatened. Lions may growl or hiss to warn another lion to back away, possibly before starting a physical fight. Lions might also growl to claim their food after a hunt and to tell others to find dinner elsewhere.

What Sounds Won’t I Hear From Lions?

We’ve already mentioned that the purring sound is only created in cats with a stiff hyoid bone, so Lions can’t purr because their hyoid bone is flexible. Another common sound that many big cats can make is called prusten, or chuffing. A chuff occurs when a big cat blows a short puff of air through the nose, kind of like a loud snort. The chuff is a near equivalent to a smaller cat’s purr, and it’s normally used for friendly day-to-day communication. The sound is also often accompanied by a head bob too.

However, Lions themselves don’t chuff.  Cats that do chuff include tigers, jaguars, and some leopards. Since lions already make low groaning and moaning sounds to socialize in friendly ways, they’re not missing out on anything by not chuffing. They just have a different way of being social!

Can Any Other Big Cats Meow Like House Cats?

If you ever have the chance to encounter a cheetah up close, you’ll hear them chirp, meow, and purr just like your own cats, although their meows might come out sounding a bit louder.

Witnessing a big cat act just like a house cat can be entertaining, but you’ll have to look somewhere other than the lion exhibit at the zoo if you want to hear the gentle, higher pitched meows you’re used to at home. Check out cheetahs, cougars, and bobcats at your local zoo if you really want to hear the way meows sound out in the wild.

If you’re interested in other ways that lions can be like house cats, move past sound and on to their behaviors. Compare the two and you’ll notice that both lions and house cats mark their territory by rubbing their scent on things. They both eat meat, they both hunt or stalk prey at night, and they both enjoy sunbathing!

Were you surprised to learn that lions can’t meow? What other differences between lions and domestic cats do you find interesting? Let us know!