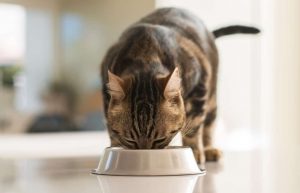 Reading cat food labels can be dizzying. Even labels with a short list of whole foods such as chicken, rabbit, peas, and barley may have mysterious ingredients thrown in and montmorillonite clay is one of those obscure additions that many cat owners find puzzling.

What is Montmorillonite Clay?

In people, this “living clay” is thought to bind aflotoxins (molds) and toxic heavy metals in the digestive tract due to its molecular structure and negative ionic charge. It is highly adsorbant, meaning harmful positively charged molecules attach to the large surface area of molecules in the clay, passing through the digestive tract. It is also thought to absorb toxins, acting effectively like a sponge.

Bentonite clay was named after Fort Benton, Wyoming, where it was discovered in the United States and is still found today in abundance. Due to their nearly identical composition, the two terms are used interchangeably.

Why Is Montmorillonite Clay in Cat Food?

Commercial dry cat foods require an anti-caking agent to keep kibble from clumping in the package. Most of these agents are man-made chemicals. Montmorillonite clay serves as a natural and effective anti-caking additive in some foods advertised as higher quality. Although pet food companies may not make direct claims of healthful benefits, cat owners may be impressed by this ingredient based on health claims in people.

There have been no scientific studies to investigate the impact of oral clay in cats. Claims of health benefits in cats arise from studies in other species or people. We can’t conclude the same would be true for cats, but it’s worth reviewing where the health claims originated to help you make an educated choice.

Clay has had benefits in horses, broiler chicks, and pigs, including resolving diarrhea and binding aflotoxins in feed. Clay proved effective in treating diarrhea in dogs undergoing cancer treatment.

Montmorillonite clay has been used by pet owners as a natural treatment following poisoning with pesticides and other toxins. This should never replace life-saving veterinary care. This benefit of clay has not been proven through scientific studies in cats.

Montmorillonite clay has the potential to cause constipation. Constipation can be a chronic and severe condition in some cats requiring medical intervention.

If your cat experiences constipation on their usual diet, switching to one containing clays may not be a wise choice. Call your veterinarian for advice if your cat skips their regular bowel movements, as constipation can be painful and may indicate serious underlying problems.

Montmorillonite clay can also contain undesirable heavy metals such as lead. Studies in the past have found trace dioxin in clay used in livestock diets. It’s important that the supplier be a trusted and reliable one that tests their product.

Studies in people have found abdominal discomfort and nausea as undesirable effects of ingesting clay when taken to reduce exposure to harmful aflotoxins in their diet. We don’t know if cat’s may experience these symptoms.

Montmorillonite clay keeps dry cat kibble from clumping. In most healthy cats it is unlikely to cause harm, but health benefits have not been proven. As with any new diet, monitor your cat’s appetite, stool and urine, and behavior. If anything appears abnormal, call your veterinarian to see if the diet may be the cause.