Skip to content
Written by Logan Michael in Cat Trees & Toys last updated January 2021
BetterWithCats.net may earn a small commission when you use one of the links on this page to purchase. 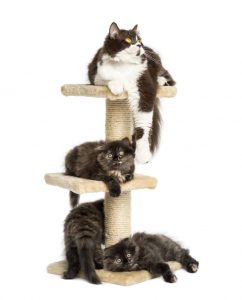 Maybe you already know that cats not only love cat trees but in many ways cats actually need them!

But what if you have multiple cats in the same household? How many cat trees will you need and can multiple cats successfully share a cat tree?

It’s a good rule of thumb to have at least one cat tree per cat in order to avoid any kitty conflicts. Of course, larger trees or a larger home will make it easier for cats to divvy up the spots and share. Still, to create the most cat-friendly home possible one tree per cat is always best.

Why is this is the case? Even though it might not always be obvious to us humans, cats are actually very territorial creatures and their social structure depends on each feline having their own specific territory. While cats can certainly break a cat tree into their own respective sections, our feline friends aren’t actually that good at sharing and too much of it can quickly lead to conflict.

While it might seem like a pain to add more cat furniture to your home, cats really do need cat trees to satisfy a long list of hard-wired instincts including the need for territory. But you don’t have to break the bank on every tree. One of my favorite budget trees is this 33.5″ inch tower on from ZENY which you can see on Amazon. It’s really got a little bit of everything (ramp, cubby, huge platform, scratching post) without breaking the bank and can be a great way to hit the one tree per cat guideline.

But it is exactly that…a guideline.

So let’s take a closer look at why cats aren’t so great at sharing and if we really need a pile of cat trees in every situation. We’ll start by taking a closer look at our cat’s territorial nature.

Why Are Cats Territorial?

The real reason why most folks will recommend 1 cat tree (or more) per cat is because cats are territorial creatures.

Sometimes it can be hard to understand why our cats would insist on battling it out with their feline roommate over the best nap spot in the house but when we look at territory from an evolutionary perspective it starts to make perfect sense.

By splitting up land and resources into understandable boundaries cats are able to prevent fights. It’s not that different from the way that humans each have their own home or territory. If we didn’t have clear lines of what was and wasn’t our own space things would get pretty dicey real fast!

The folks at International Cat Society offer a more technical explanation, “For a species where individuals are essentially solitary hunters, it is important for cats to establish a territory (ie hunting territory), and that this is defined in such a way as to generally avoid conflict with other cats (for the survival of the species).

How Do Cats Split Up Their Territory?

While it’s easy for others to tell which house is yours and for everyone in the house to understand which room is yours, cats don’t always see territory in such clean and clear lines. As the ASPCA points out, “A cat’s perceived territory could be the entire house or part of it, the yard, the block or the neighborhood.”

That means one cat could see the couch, window sill, and chair as their territory and another cat could have their own territory mixed in between all that.

Yeah, it can get pretty confusing but if you pay close attention to your cats then you’ve probably already seen this in action. It’s likely that you can almost always find one of your cats in one spot that just isn’t ever shared. That’s because it’s their territory and your other cat respects it.

But even that isn’t always so clear!

Why You Shouldn’t Try To Define Your Cat’s Territory

The complex social structure and territory definitions for cats isn’t for humans to understand completely! Instead, you’re better off just making sure that your cats have all the appropriate resources they need without having to share.

That means a cat tree, or at least a comfortable equivalent, for each cat.

But it doesn’t end there.

You should also have several food and water bowls throughout the house so that cats aren’t forced to share essential resources. While it might seem like a bit of a pain to double, triple, or quadruple up on everything it’s a lot easier than trying to get a complete understanding of feline politics!

My Cats Seem To Be Sharing Their Cat Tree Just Fine!

There’s a big difference between sharing because you want to and sharing because you have to. In many cases, cats share out of necessity not because it’s in their nature to do so. While that may seem extreme in the case of a cat tree, the fact is cats need to scratch and have a deep instinctual drive to climb trees. In fact, the desire to scratch is so ingrained in our cats that even declawed cats will continue to scratch and should actually have their own scratching post!

They also need to eat and drink so just because they’re sharing their water bowl doesn’t mean they actually want to!

However, with cat trees, it can be a little more complex since cats don’t actually need a tree to get all the benefits that a cat tree provides.

But you might be saying, “Hey, my cats actually cuddle on the same tree. They clearly aren’t cuddling out of necessity!”

Fair point. Remember, that cat territory lines are complex and nuanced. Cats can most certainly share space and even cuddle but if you watch closely you’re likely to notice that there are still spots that just aren’t shared. The goal of providing enough resources is to make sure that the cat tree doesn’t become one of those exclusive territories.

Does It Have To Be A Cat Tree?

It’s more important to think about the needs of your cats instead of the actual tree.

Cat trees satisfy your cat’s instinct for territory but also their need to climb, scratch, and be comfortable. But of course, a cat tree isn’t the only piece of furniture that can do all these things. If your home has multiple places for cats to perch, scratch, and call their own then you might not need a cat tree at all.

Again, that’s why the one cat tree per cat is a guideline. You are able to get away with one cat tree or even no cat tree at all as long as cats aren’t having to fight over key resources. That’s why it’s more important to evaluate your home from a needs and resources perspective rather than just a checklist of stuff.

Still, in most cases, a cat tree is going to be the easiest, and most cost-effective,  way to satisfy your cat’s natural instincts. With the amount of variety in the market, you can also find the perfect tree specific to your cat whether they’re a giant Maine Coon, an older senior kitty, or even declawed there’s a cat tree to cater to them. That’s a lot more difficult to do if you’re looking at shelving or DIY options.

But because of their territorial nature and the high-value of a cat tree, they probably shouldn’t. While it’s going to depend on your exact situation and the specific feline company you keep, it’s best to never make cats fight for important resources. That’s why it’s usually a good idea to have at least one cat tree per cat.

Why is guar gum in cat food? Is this ingredient safe for cats or should you worry? We asked a veterinarian for the answer.

If you want to know whether shorthair cats shed more or less than longhaired cats, we have all the answers, plus a shortlist of low-shed cat breeds!